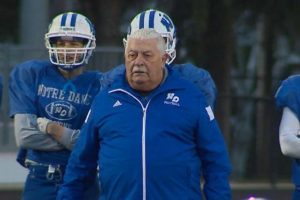 Longtime High School Football coaching legend John Nowak retired in November after 31 seasons.  He passed away this week at his home at the age of 69.

Nowak spent 31 seasons as a head coach, four years at Premontre and the last 27 at Green Bay Notre Dame.  He won 225 games and led his team to two WIAA state titles in four appearances.  Notre Dame went to four WIAAA State title games under Nowak, winning the D1 title in 1992.

Nowak was inducted into the Wisconsin Football Coaches Association Hall of Fame in 2004.

Nowak battled health problems in recent years and coached from the press box at times this past season.

Nowak announced before the 2016 season that he would be stepping down at the end of the year.  He led the Tritons to the 2015 Division 3 state championship and finished runner-up in his final season.