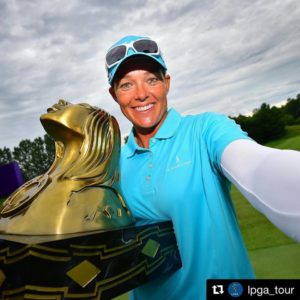 Katherine Kirk – Photo Courtesy of Thornberry Creek and the LPGA.

Kirk’s winning total of 22-under-par 266 was a career best.  She beat Ashleigh Buhai of South Africa by one stroke.

Kirk rolled in an 11-foot birdie putt on hole number-18, avoiding a potential playoff with Buhai, who put her approach shot within three feet of the cup.

More than 50,000 fans made their way through the turnstiles during the four-day event, which was missing seven of the top ten players in the Rolex Women’s World Golf Rankings.