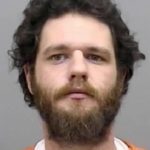 Charges are pending against a 33-year-old man who police say was naked and threatening others with a knife, and then was accidentally burned while being arrested.

Manitowoc Police were called this past weekend to a street where Travis Tingler was allegedly threatening to “gut” someone.

Officers say he struggled as they tried putting him into their squad car, and it took three attempts with a Taser stun gun to subdue him — the second of which punctured a lighter he was holding. Officials say it ignited his chest and facial hair, but he resisted police efforts to put out the flames.

After being sedated, Tingler was taken to a hospital and then to jail. He reportedly had drugs and alcohol in his system.

Police have asked Manitowoc County prosecutors to charge him with resisting arrest with battery to a police officer, disorderly conduct, and lewd and lascivious behavior.