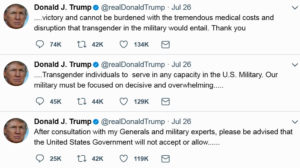 President Donald Trump said on Wednesday he would ban transgender people from the U.S. military. It’s a reversal of policy established under former President Barack Obama, and Congressman Mark Pocan doubts that it’s about the costs of accommodating transgender service members.

“This is not a financial issue, this is more about appeasing a part of his base, and I think it’s dishonorable to all service members when you dishonor any,” the 2nd District Democrat said, arguing that the move is more likely meant to appease the president’s core supporters.

The change, announced on Trump’s Twitter account, leaves the status of several thousand active duty and reserve transgender service members unclear. “The bottom line is we’re talking about thousands of people who currently serve the country, who are now being dishonored by the president’s tweeting” Pocan said. “Someone who’s dodged the draft, I think 5 times, is trying to give advice to people who are defending our country.”

CNN reported on Thursday that the Joint Chiefs of were not aware that President Trump planned to tweet a ban on transgender service members.