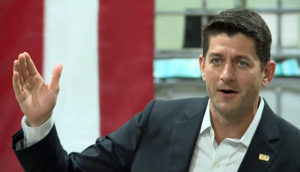 House Speaker Paul Ryan says tax and regulatory reform remain priorities for him. Ryan toured an industrial facility in Oak Creek and took some questions from workers there, during an “employee town hall” on Thursday.

With more jobs tied to manufacturing per capita in Wisconsin than in any other state, the Janesville Republican said Thursday that the current tax structure puts those industries at a disadvantage. “One of the reasons that we’re doing tax reform this year is to not just have more jobs and faster economic growth, but to put American businesses and manufacturers at a competitive scale globally.”

Ryan, at WPC Technologies in Oak Creek, said American manufacturers are, in some cases, taxed at twice the rate of their foreign competitors. “That makes us really uncompetitive.”

He said tax and regulatory reform are twin priorities. “We want to have smart regulations that work, that don’t make American products so prohibitively expensive that we can’t make it here.”

Ryan also said Thursday that North Korea is currently his biggest foreign policy concern. Ryan was asked about Tuesday’s missile test by that country. “We cannot accept a North Korea with a nuclear weapon that they could deliver over a long-range,” Ryan said. “It is a real problem.” Ryan said China and U.S. allies Japan and South Korea will play an important role in reining in North Korea’s nuclear ambitions.