You are here: Home / Sports / Sabin signs to play in Denmark Professional League 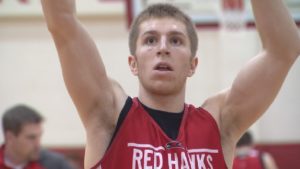 Ripon’s all-time leading scorer Ty Sabin has signed a contract to play for the Horsholm 79ers in Horsholm, Denmark over the weekend.

The New Berlin, Wisconsin native was named NABC Central District and D3hoops.com Central Region Player of the Year in 2017, leading all of Division 3 in scoring with 30.7 points per game.  Sabin also ranked seventh in D-III in 3-point shooting (.478), while ranking 21st in 3-pointers per game (3.31).  Sabin’s 86 total 3-pointers in the 2017 season ranked 18th in D-III and is just five shy of Ripon’s single season record.

Sabin, who is a First Team All-American and three-time Midwest Conference Player of the Year, started all 98 games during his career with the Red Hawks, scoring in double figures each time, and finishing his career leading the NCAA, across all divisions, in career scoring average among active players (26.1 ppg).  He’s one of only two players in MWC history to score more than 2,500 points.

Sabin joins a Horsholm 79ers team that finished 17-16 last year and in third place in the Basketligaen, which is the highest-ranked professional league in Denmark.