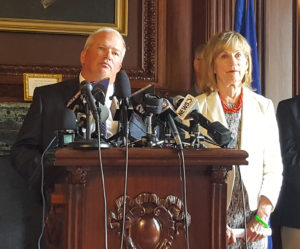 The proposal unveiled at a Capitol press conference includes much of the work the Legislature’s Joint Finance Committee has already done on the budget, along with areas that both chambers have already agreed on but have not yet been up for a vote – such as on K-12 education funding. It also includes the Senate’s latest version of a plan to fund state transportation projects, which would rely on about $712 million in borrowing.

Senate Republican Leader Scott Fitzgerald (R-Juneau) said it’s intended to be a starting point to get talks going again, so lawmakers can meet and get a budget passed out of the JFC. “Then we can hit the floor and get this done very quickly,” he said.

Whether the plan will accomplish that goal remains to be seen though. While he said he was encouraged by the fact that Senate Republicans appear willing to resume talks, Assembly Majority Leader Jim Steineke (R-Kaukauna) said it’s clear the two chambers are still far apart on what transportation funding needs to look like. He said the proposed borrowing, which is down from the $850 million Senate Republicans previously proposed, still has not changed much…and neither has the position of Assembly Republicans. “If we’re going to do any bonding, we’ve got to find some way to pay for it,” Steineke argued.

Sen. Alberta Darling (R-River Hills), who co-chairs the finance committee, called the position of paying for road projects as they are being done “unrealistic” on Tuesday. “It is impossible to pay for those projects in cash, we have never done that,” she said.

Minority Democrats voiced frustration with the continuing impasse. Speaking to reporters, Sen. Jon Erpenbach (D-Middleton) placed the blame on Governor Scott Walker for dragging out the budget process. “I don’t believe it’s the speaker’s vault, I don’t believe it’s the majority leader’s fault…it’s the governor’s fault,” Erpenbach said. “Come back to Madison, sit down with the speaker, sit down with the majority leader, and stay there until we have a state budget.”

The state’s fiscal year ended on June 30th and lawmakers have made no public progress on the budget since the middle of last month. A spokesman for Walker said the governor welcomes the plan offered by the Senate, and he will keep working with the Legislature to reach an agreement.