You are here: Home / News / Strong storms cause flooding across Wisconsin 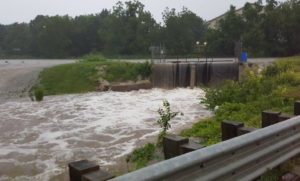 Northwest and southern Wisconsin are dealing with floods and more damage, after more storms rumbled through the state overnight.

The National Weather Service says the wall of a Menards’ store near Saint Croix Falls was blown down, and a house was blown off its foundation there. In southern Wisconsin, part of Highway 12 in Walworth County was flooded, while water built up in a Walworth County jail block for work release prisoners. A canal was closed near Browns Lake in Racine County, and a rock slide and road washout were reported at Cassville along the Mississippi River in Grant County.

Cars were stranded in a number of places, as up to six more inches fell in parts of Racine and Kenosha counties — the same place where up to six inches fell just two days ago.

Almost 8,000 electric customers were without power in the affected areas early Wednesday morning.

Central and southern Wisconsin could see more problems later today. The NWS in Milwaukee says more severe storms are expected to develop this evening and into the overnight hours.