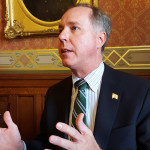 Republican legislative leaders appear no closer to a compromise on the state’s transportation budget.

Assembly Speaker Robin Vos spoke with reporters Wednesday morning, prior to meeting with Senate Majority Leader Scott Fitzgerald and Governor Scott Walker. “We have said from the very beginning, we need more money to be able to pay for the roads that everybody knows are important. If the Senate refuses to raise the money, well them obviously we can’t borrow more, considering our debt service is already at a level that’s worse than the federal budget,” Vos said.

The impasse on transportation, along with K-12 education funding, has held up completion of the overall two-year state budget. The state’s fiscal year ended June 30th, and agencies and programs are being funded at levels set in the previous two-year budget. Wisconsin is one of a handful of state’s that have yet to pass new spending plans. 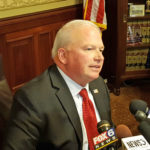 Later Wednesday, state Senate Majority Leader Scott Fitzgerald put the blame for the transportation deadlock on Vos, calling the Speaker’s request for new revenues “a non-starter” with his members.

“Even with 20 seats in the Senate, I simply do not have the votes for any type of revenue upper. It’s just not there,” Fitzgerald said on WIBA’s “Vicki McKenna Show.”

Fitzgerald said his Senate Republicans remain supportive of something close to what Governor Scott Walker proposed — no tax or fee increases, but increased borrowing. “It’s not that each and every member of the caucus is clamoring for more bonding, but the fact of the matter is, it’s kind of the reality, especially as we sit here in mid-July.”