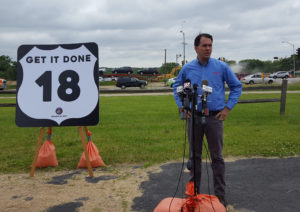 Governor Scott Walker is offering a proposal he argues could resolve a stalemate over transportation funding in the state budget.

In a letter sent to lawmakers this week, Walker proposed reducing state borrowing for road projects from $500 million to $300 million. He also wants an unspecified amount of bonding to fund ongoing mega projects in southeastern Wisconsin, which would be tied to a possible increase in federal funding.

If the numbers check out, Senate Republican Leader Scott Fitzgerald (R-Juneau) believes it could help resolve differences that have been holding up a budget agreement. “I’m all ears and, if somebody can tell me that will work, then I think that it will build credibility with the caucus and hopefully that might be one piece of what gets us through the transportation budget,” he said.

In his letter, Walker described the funding for major projects in southeastern Wisconsin a win for the Senate…a point Fitzgerald agreed with as being necessary to get a budget through his chamber. “I don’t know if you can get the votes without doing something on that.”

AUDIO: Sen. Scott Fitzgerald was skeptical about a plan to rely on increased federal funding (:28)

Assembly Speaker Robin Vos (R-Rochester) was not available for comment. However, he has previously said he opposes borrowing to pay for road projects, and would like the governor and Senate to at least look at new revenues to fund transportation.

Democrats on the Joint Finance Committee criticized the proposal. Rep. Katrina Shankland (D-Stevens Point) described the proposal as a “gimmick” that Republicans should reject. “Governor Walker has repeatedly failed to identify a responsible funding solution for our state’s crumbling roads – and worse, he hasn’t even tried. It’s clear from the governor’s newest ‘proposal’ that he intends to continue this pattern of failed leadership,” she said in a statement.

Lawmakers are nearly a week past a June 30 deadline to pass a biennial state budget, with talks stalled for weeks now because of disagreements over transportation and K-12 education funding. Majority Republicans in the Senate were spending most of Thursday behind closed doors with members of the Legislative Fiscal Bureau to go over action taken on the budget up to this point. Members of the Assembly GOP had no plans to meet this week.