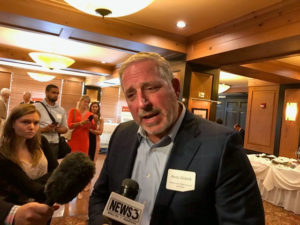 A Democrat who’s running for governor says the state doesn’t have enough information to make an informed decision on Foxconn. Milwaukee businessman Andy Gronik participated in a Wispolitics luncheon in Madison, where he was repeatedly pressed about the state’s three billion dollar incentive package for Foxconn — and how he’d vote on it.

“If I was the board of directors and our CEO – Governor Scott Walker — brought me this deal, I would first deny the deal, and then I would fire Scott Walker. That’s what I would to,” Gronik said. He also said that if the Foxconn incentive package is approved and he’s elected governor next year, he’ll try to make sure it’s “the best deal for the state of Wisconsin.”

Gronik said the state doesn’t have enough information to make an informed decision on Foxconn, and said bringing the Taiwanese electronics giant here won’t mask overall poor jobs performance by Republican Governor Scott Walker. “The fact is that there were less than 12,000 private sector jobs created in the state of Wisconsin last year. This Hail Mary pass with Foxconn, does that somehow make up for seven years of an ineffective plan? I just don’t get it.”

He also said that if the Foxconn incentive package is approved and he’s elected governor next year, he would try to make sure it’s “the best deal for the state of Wisconsin.”

Gronik, one of five Democrats who’ve officially launched campaigns to challenge Walker in 2018, said the governor has no long-range plans for things like rural broadband, K-12 education, and transportation infrastructure.

“What Governor Walker wants to do is stick to the brand,” he said, talking about the state’s bonding for transportation projects. “The brand is ‘no new taxes.’ That’s why no gas tax. What he doesn’t say in this branding statement is ‘I’m just to charge it on your charge card instead.’ That’s not fair, that’s sneaky.”

Gronik, asked by Wispolitics‘ Jeff Mayers why he never signed the petition for Walker’s 2102 recall, replied “I was never asked to sign it.”