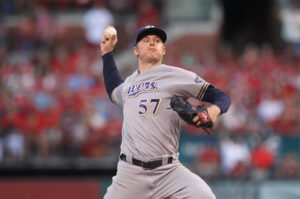 Jesus Aguilar clubbed two home runs and added 3 RBI as the Milwaukee Brewers knocked off the Colorado Rockies 8-4 on Sunday at Coors Field.

Keon Broxton went 2-for-4 with a walk, two RBI and two runs scored for the Brewers, who have won six of their last seven and remain 2-games behind the Central Division leading Chicago Cubs.

Chase Anderson tossed five innings of one-run ball to improve his record to 7-2.  Corey Knebel closed it out for his 26th save.

Former Brewer Mark Reynolds homered and drove in three runs for the Rockies, who went 3-4 on their seven-game homestand against Atlanta and Milwaukee.

Rockies starter Kyle Freeland allowed three runs in 5 2/3 innings and took the loss.  He dropped to 11-8.