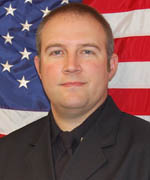 An Ashwaubenon police officer who was hit by a suspected drunk driver on I-41 has been released from the hospital.

Officer Brian Murphy used a walker while he walked out of the hospital doors and through two receiving lines of officers and public safety workers Thursday. Ashwaubenon Captain Jody Crocker says a procession of police cars escorted Murphy to his house.

Crocker says Murphy still has a long way to go in his recovery, but he has a lot of support.

Murphy was directing traffic on I-41 when he was hit by an SUV almost three weeks ago. Police arrested 28-year-old Kalin McGuire of Greenfield, who is facing a felony charge of hurting someone while driving drunk.

Prosecutors say she left a wedding reception and her husband and young son were riding with her.