You are here: Home / Packers / Bulaga ruled out of Denver game 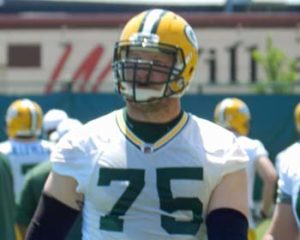 Green Bay Packers head coach Mike McCarthy ruled right tackle Bryan Bulaga out of Saturday’s third preseason game against the Broncos in Denver.  Bulaga limped off the practice field on Wednesday with an ankle injury and said he’s focusing on being ready to play in the regular season opener against Seattle on September 10.

Bulaga said X-rays were negative but he was still waiting for results from an MRI to see if there’s any further damage.

At this point, Bulaga said he’s not overly concerned about the ankle, despite not having the MRI results available.

AUDIO: Bryan Bulaga said he’s not concerned about being ready for the regular season opener :20

Without Bulaga in the lineup against Denver on Saturday night, Mike McCarthy has to decide how much he wants to expose Aaron Rodgers.  The Packers options behind Bulaga are a pair of second year players, Kyle Murphy and Jason Spriggs.

Spriggs is the more experienced of the two by far.  He played 276 snaps last season, but only 29 of those came at the right tackle position.

Murphy was first in at right tackle in practice on Wednesday, after Bulaga went down, so it could be his job out of the gates against the Broncos.

The first unit usually plays a significant amount of time in the third preseason game and then not at all in the final game, so the timing of the injury isn’t good.  But it also gives Murphy or Spriggs or both, an opportunity to see what they can do with the first unit.