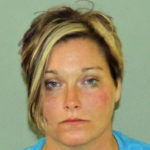 A 32-year-old woman was apparently drunk, when she drove her SUV into a tent at a campground and injured seven people from Milwaukee.

WKOW TV reported that two people remained hospitalized, with injuries they received in Saturday night’s incident at the River of Lakes Campground at Bagley.

According to Grant County sheriff’s deputies, Stacy Smith of Fennimore tried making a left turn when her vehicle went out of control and hit the tent. And then she reportedly backed into the tent a second time. Smith was booked on a possible charge of causing great bodily harm by drunk driving, and released on $500 bond.