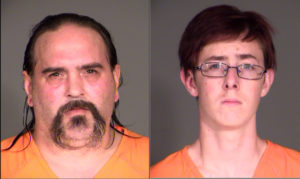 Prosecutors in Fond du Lac County have charged three people in connection with the sexual assault of a six-year-old child.

Forty-one-year-old Shane Berg, 18-year-old Tory Tuinstra, and a 40-year-old woman were charged in Fond du Lac County Court Wednesday. Bond for each has been set at $250,000 cash.

According to the criminal complaint, Berg and Tuinstra both allegedly had sex with the six-year-old, while the woman allowed it to happen. All three suspects lived in two apartments, which had a connecting door. The victim was also allegedly forced to watch three people have sex.

The sexual assaults occurred between June of last year and August of this year.

While talking with investigators Tuinstra described the lifestyle in the house as one of dominance and submission. He told detectives Berg was the dominant one and went by the name of “Master Wolf.”

All three have preliminary hearings on September 1.