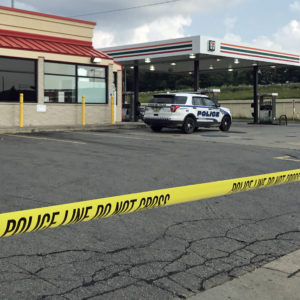 In a little over a week, three people have been killed in Madison.

The latest was gunned down outside a 7-Eleven early Wednesday.  Police chief Mike Koval said a 33 year-old man was killed, and a 29 year-old man seriously wounded by gunfire. He is expected to survive.

Police are searching for two suspects.  Koval said one looked like an African American male and one was either a light-skinned African American man or a Latino man. Both had masks on and were sitting outside the convenience store, waiting for the victim.

Koval said the suspects made no attempt to go into the 7-Eleven or rob anyone. Investigators are not sure of a motive, but believe one or both of the victims were targeted. “This was a cold, brutal assassination,” Koval said.

Also on Wednesday morning, two people of interest in a homicide on Madison’s North Side last week were taken into custody.

Police credit an observant citizen who recognized Johnson outside of the Pine Cone Restaurant, on Highway 51, near Windsor.  Johnson then led deputies to Lovick, who was at Token Creek County Park.

The two are wanted for questioning in the death of 24 year-old Ciara Philumalee early last Friday morning.