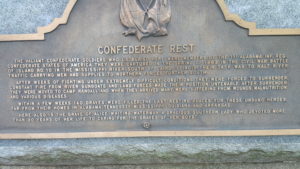 A plaque and stone honoring Confederate war dead are now gone, from a Madison cemetery. The removal was announced by Madison Mayor Paul Soglin in a statement from his office.

The removal of City-owned monuments to confederate soldiers in Forest Hill Cemetery has minimal or no disruption to the cemetery itself. There is no disrespect to the dead with the removal of the plaque and stone. The Civil War was an act of insurrection and treason and a defense of the deplorable practice of slavery. The monuments in question were connected to that action and we do not need them on City property.

They were put up in 1981, the gift of a Mr. & Mrs. William Huggins. Former Madison Alder Chris Schmidt was at Forest Hill Cemetery on Thursday. “It was meant to memorialize the Confederate soldiers buried here. However the language used was similar to . . language used in the ‘Lost Cause’ monuments that are spread throughout the country, particularly in the South. The Lost Cause was a movement to sanitize the history of the Confederacy and the Civil War.

The men were captured in action on the Mississippi River in 1862 and imprisoned at Camp Randall, where they died. The plot within the city-owned cemetery is the northernmost spot in the U.S. where the remains of Confederate soldiers are interred. Schmidt notes who soldiers served the Union are buried nearby. “That’s V.A. property. They have a historical marker up there which explains what’s going on, that is much more neutral langauge than anything you say down here.”

In his statement, Soglin said that a larger monument at the site, which has received less attention, will also be removed. The action in Madison is similar to what’s already occurred in some other U.S. cities, and is being considered by others.

President Donald Trump took to Twitter to deride the removals. “Robert E Lee, Stonewall Jackson – who’s next, Washington, Jefferson? So foolish!” Trump tweeted. “Also the beauty that is being taken out of our cities, towns and parks will be greatly missed and never able to be comparably replaced!”

The Forest Hill memorials were not Madison’s only monuments, to the Civil War, but those remaining honor those who served the Union. They include a large stature on the Capitol grounds of Colonel Hans Christian Heg, a Norwegian immigrant who was killed in 1863, as well as smaller statues of a Union soldier and veteran, on the grounds of Camp Randall.