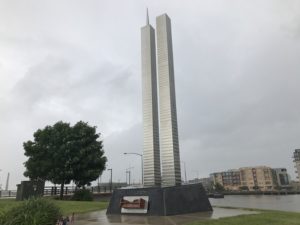 Green Bay’s parks committee voted Wednesday night to have the deteriorating September 11th memorial on the edge of the Fox River taken down.

“It seems like every time I go and look at it, it’s in worse shape,” said Randy Scannell, a Green Bay alderman who was on a subcommittee dedicated to figuring out what to do with the memorial. “Over the years there was constant complaints about the condition of it and rightfully so.”

Cracks and factual errors litter the memorial, which was donated and dedicated 12 years ago.

The city’s parks committee agreed with the subcommittee that it should be taken down, with the steel beam being saved for a future memorial. “We’re looking at setting up an interactive display, so it would have a touch screen,” said Steve Grenier, the city’s public works director. “You can get a lot more information than just the monument.”

The plan is to remove the steel beam from the memorial on September 11th of this year. A police and fire honor guard procession would then bring the beam to the city’s police department to be displayed for six months.

It would then rotate between the police and fire departments until a joint headquarters is built where the beam would permanently be on display.

“It’s interesting to note and very important to remember that the only part of the monument that has any kind of tie directly back to the World Trade Center is the steel beam,” said Grenier.

The city council will vote on the memorial plan next week.