You are here: Home / Crime / Courts / Madison cracking down on ‘egregious’ offenders 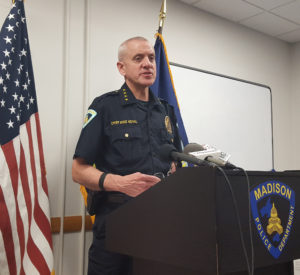 As Madison works to deal with a spike in gun violence this summer, Madison’s police chief says there will be a crackdown on “egregious” offenders in the coming weeks.

The city has seen 10 homicides so far in 2017, which is tying the most homicides in Madison in a single year. There has also been a string of shootings in recent months that have resulted multiple injuries and that have come close to injuring innocent bystanders.

MPD Chief Mike Koval says many of the shootings have been retaliatory in nature. He wants to “disrupt” the comfort zone for individuals who have ties to several of the gun crimes, and hopefully prevent another homicide.

Koval says there are about four or five dozen people that are holding a city of a quarter of a million hostage to their fears, and he’s adding extra patrols of officers working overtime to seek out those individuals in the next few weeks. Koval stresses they are not going to stop just anyone who merely looks suspicious, but will making an effort to pinpoint people who already have outstanding warrants or probation violations.