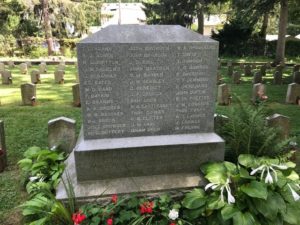 Madison’s mayor is defending a decision to remove a memorial honoring confederate soldiers from a city cemetery.

Mayor Paul Soglin ordered the removal of a plaque and stone last week, which had been at Forest Hill Cemetery since 1981 to honor Confederate prisoners of war buried there. He also wants the city council to decide what to do with a second and larger stone, which was placed by the United Daughters of the Confederacy in the 1930s.

During a news conference on Monday, Soglin described the second memorial, which features the names of those buried at the site, as a “slab of propaganda” that was paid for by a racist organization. He wants to see it removed, changed, or used as an educational tool to talk about those who downplay slavery by setting up a second memorial nearby. “It’s time for education…it’s time for people to learn this history of this nation,” he argued.

Soglin said the city will continue to honor history and respect the dead, but he is ready to fight against any pushback the city may face. “It has been there for too long and it is time that we explain to the United Daughters of the Confederacy that their century of tyranny standing alongside the Ku Klux Klan is over,” he said.

A message seeking comment from the United Daughters of the Confederacy was not immediately returned.