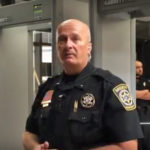 Starting Wednesday, the Marathon County Courthouse will only have one public entrance with a full security screening process, with two metal detectors and an x-ray machine for bags.

“If you were to . . . go down to the courthouse in Madison, the Dane County Courthouse, they have a modern courthouse with all the different modern security features. They don’t have to take prisoners through the hallways . . . their parking is in designated areas, they have controlled access on the entrances and the exits.”

The security station will be staffed by a minimum of two deputies when the courthouse is open, including for county board meetings. Staffing will change depending on the traffic levels expected that day and the time of day.

The changes cost the county $300,000, including a wheelchair ramp, which hasn’t been constructed yet. Seven part-time deputies were hired for security duties.