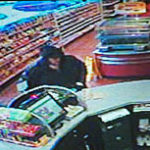 Prosecutors said Tipton was person in this surveillance video

A man who admitted rigging lottery drawings in Wisconsin and four other states has been sentenced to prison in Iowa, and faces additional time in Wisconsin.

Computer expert Eddie Tipton was head of security for the Multistate Lottery Association. His co-conspirators earlier confessed they rigged jackpots in Wisconsin and two other states.

Tipton was caught after Iowa Lottery officials refused to pay a 2010 jackpot because of suspicions about a Canadian claiming the prize. After releasing video of the person who bought the ticket, an official with the Maine Lottery immediately recognized the guy in the hoodie as Tipton.

Tipton told a judge in Des Moines on Tuesday that he regrets his actions and he’s sorry for the people hurt. Tipton was sentenced to up to 25 years in prison, but with time off for good behavior he’s likely to be paroled in three or four years.

Tipton is due in a Wisconsin courtroom on September 18th, and his attorney expects Tipton to be sentenced to at least three if not four years by a judge here.