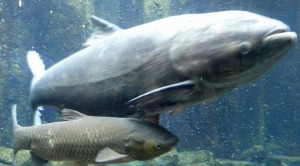 A bighead and a silver carp. (Photo: Andrew Beckett)

The Army Corps of Engineers plans to spend $275 million on new technology to try and keep invasive Asian carp species out of Lake Michigan. Strong water jets and underwater noise devices are among the things planned at the Brandon Road lock and dam near Joliet, Illinois on the Des Plaines River, under a plan announced Monday.

Officials have been working on new measures to keep the voracious carp from making its way into the Great Lakes, where it could likely devastate the commercial fishing industry. A two foot carp was pulled from the Chicago Ship Canal in June, about nine miles from Lake Michigan.

Conservation and environmental groups offered tentative praise for the plan, calling the use of the dam location a logical chokepoint in efforts to slow the movement of the fish. In a joint statement, the Alliance for the Great Lakes, Natural Resources Defense Council, Prairie Rivers Network, and Illinois chapter of the Sierra Club also criticize the Corps for delaying the release of the report for several months. “The study, which was completed months ago, should have been released in February yet the Administration sat on it in reaction to pressure from industry groups and officials from the states of Illinois and Indiana. This delay wasted valuable time, putting the Great Lakes at unnecessary risk,” they argued.

A public comment period on the proposal is open until September 21.