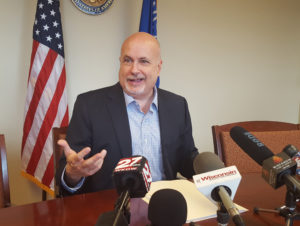 A Wisconsin Congressman says how the U.S. treats imported goods in the future could have a big impact on how good the state’s deal with Foxconn ends up being.

U.S. Representative Mark Pocan (D-WI) believes threats by President Donald Trump to place tariffs on imported goods likely played a big role in the Taiwanese electronics maker’s decision to build a factory in the country. “The whole reason they’re even looking at coming here is because he’s making big talks about tariffs and things that have to be made in America,” Pocan said. “If that’s doesn’t become a reality – and it’s not exactly a priority of the Republicans in Congress – a lot of this may be for naught.”

Wisconsin Governor Scott Walker and Foxconn executives signed a memorandum of understanding last week. It indicates the company will build a major manufacturing facility in southeast Wisconsin that could employ up to 13,000 people, while the state will grant up to $3 billion in incentives. Lawmakers are currently in the process of reviewing legislation that will help move the deal forward.

Pocan said state lawmakers should proceed with caution and due their due dilligence to make sure the deal is not a “taxpayer boondoggle.”

Speaking to members of the media on Wednesday at his Madison office, Pocan noted that the bottom range of the jobs the company say it could create is 3,000, while the up to 13,000 number is more of a goal. “Up to’s are like aspirational, they’re not putting food on people’s table,” Pocan argued.

Despite his concerns, the Madison Democrat says he is hopeful Foxconn will work out for the state. “If there are 13,000 jobs at $55,000 a year, that’s an extremely good thing for Wisconsin,” he said.