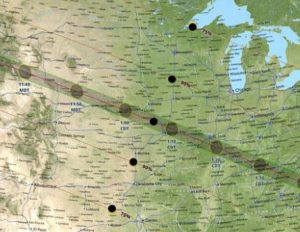 In just two weeks, North America will get a chance to see a rare solar eclipse. For those hoping to catch a glimpse of the event, Wisconsin Optometric Association president David Nelson says you need to protect your eyes.

Nelson says those viewing the eclipse on August 21st without at least wearing special glasses run the risk of causing irreparable damage to their eyes, including possible vision loss. “It can cause severe vision problems,” he warns.

Special glasses for looking directly at the sun can be ordered online or found locally. Be sure to look for ones with a safety marking, which will indicate a rating of “ISO 12312-2.”

Glasses viewed to use the eclipse should be free of scratches, and binoculars, telescopes, and cameras should not be used to look at the sun.

Nelson notes normal sunglasses are not a viable substitute, since they do not filter out the UV rays that cause damage to your eyes.

While the total eclipse will be viewable further south, most Wisconsin residents will still be able to see the moon cover more than 70 percent of the sun.