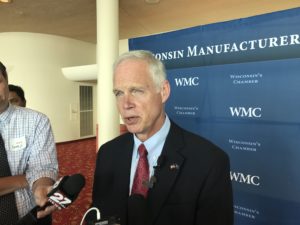 President Donald Trump’s comments blaming “both sides” for last weekend’s events in Charlottesville are putting some members of his own party on the spot. U.S. Senator Ron Johnson, in Madison on Wednesday, was asked whether the president needs to further disavow the “alt-right” groups whose Charlottesville rally led to a woman’s death.

“You tell me what he needs to say so we can move beyond this,” Johnson said. “I’m not going to speak for the president. I speak for myself. I have totally dennounced it.”

Johnson was at the Monona Terrace for Wisconsin Manufacturers and Commerce’s Policy Day event. “I find it depressing that a young woman who was basically pushing back against people who are flying under a flag of an ideology that is evil lost her life,” Johnson told business people. “That’s not good.”

“If I were to give the president one piece of advice, it’s try and focus all of your efforts, all of your energy . . . on how do we unify the American people.”

Reporters who spoke with Johnson after his remarks also asked whether it’s time to talk about removing the president from office. “Listen, the American people elected Donald Trump, and I’m not sure he’s changed much from what he was during the campaign. So I see no grounds for that.”

Asked whether he thinks the president is racist, Johnson said no. Pressed why, he said “Because I just don’t think so.” Johnson wrapped up his comments on the issue when asked whether Trump tolerates racism too much: “do you have any other questions? I think we’ve covered this one well enough.”

Johnson conceded that the president’s remarks are making it more difficult to focus on policy. “I think it’s obvious that this is getting in the way, which is why I would like to move on as quickly as possible, and start unifying rather than dividing this country.”