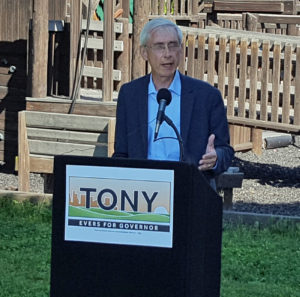 With a playground full of children serving as a backdrop, state Superintendent of Public Instruction Tony Evers on Wednesday morning officially announced he’s running for governor in 2018. “I’m running because I’ve always believed that what’s best for our kids translates into what’s best for our communities, best for our economy, and…best for our Democracy,” Evers said at a park in Fitchburg, a suburb of Madison.

Evers, who is serving his third term as the state’s top school official, plans to seek the Democratic nomination. While currently serving in a non-partisan office, Evers said he is a “proud Democrat” who will fight to uphold progressive values, while also being open to working with Republicans.

While Governor Scott Walker has not officially announced he’s seeking a third term, he has hinted several times that he will make an announcement after work on the overdue state budget is complete. During his announcement speech, Evers criticized Walker on numerous issues – ranging from a proposed $3 billion incentive package he negotiated with Taiwanese electronics maker Foxconn to his failed run for president two years ago and his support for President Donald Trump.

“Walker has failed Wisconsin,” Evers argued. “Instead of seeking solutions, he’s gone from running for president to defending a president who disgusts and embarrasses many of us.”

Republican Party of Wisconsin officials criticized Evers as a “Madison bureaucrat” who has failed at running his own agency. “While Governor Walker has fought for hard-working Wisconsin families and delivered results, Tony Evers has repeatedly failed to stand up – even allowing a teacher to remain in the classroom while spreading pornographic material in school,” RPW spokesman Alec Zimmerman said in a statement.

Zimmerman was referring to the case of a Middleton teacher, who was fired in 2012 after viewing pornographic material on a school computer. The teacher appealed the decision and had his firing overturned by an arbitrator. Walker and others asked the DPI to revoke his license, but the agency ruled that his conduct did not reach the standards in place at the time of his firing that would have allowed that to happen.