You are here: Home / News / Wachs announces run for governor 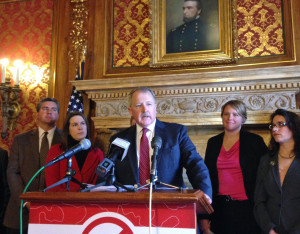 Another Democrat is launching a campaign for governor.

State Representative Dana Wachs (D-Eau Claire) made his announcement in a video posted online, where he said he’s running for governor because “he loves the state” and “wants to level the playing field for everyone who lives here.”

Wachs is a personal injury attorney who has served in the state Assembly for five years. “I’ve seen firsthand how our system is rigged for those at the very top,” he said.

Democrats are expected to have a crowded field of candidates hoping to take on Republican Governor Scott Walker in 2018. Milwaukee businessman Andy Gronik and Barneveld native Bob Harlow have officially launched campaigns, while at least a half dozen other Democrats are currently considering a run.

Walker is expected to announce his re-election plans after work on the overdue state budget wraps up.