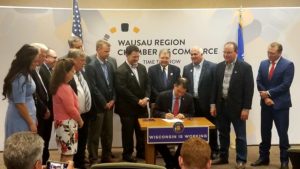 In the past, non-elected agencies have been able to push through large changes to their rules, often times without input from officials. This will stop the big ticket items, according to Walker.

Walker said, “If something has a cost impact over $10 million to industries or employers, this automatically requires action by the Legislature so that something can’t go through that essentially is promulgated by people who aren’t elected.”

The new law also allows for more research on the economic impact of new agency rules.

“If someone questions whether or not the cost estimate is accurate, there’s an independent ability to have an economic impact statement done to ensure we know what the true costs are to employers and industries in the state,” said Walker.

The bill continues procedural changes that were started back in 2011. Walker says these changes are helping business owners have more confidence in the stability of state government, which he says is support by the record amount of employed people in Wisconsin.