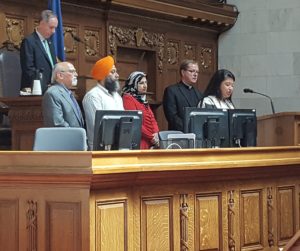 Members of the state Assembly have passed a resolution condemning white supremacists and the violence that took place in Charlottesville, Virginia over the weekend.

The Assembly opened Thursday’s floor session with a unity prayer from the leaders of five different faiths. Father Tim Kitzke with the Milwaukee Catholic Archdiocese was among those who called for understanding and love, while addressing the chamber.

State Representative JoCasta Zamarippa (D-Milwaukee) said lawmakers have a responsibility to denounce acts of hate and violence. “There is no place for bigotry or prejudice in the great state of Wisconsin, nor our beloved United States,” she said.

Assembly Republican Leader Jim Steineke (R-Kaukuana) said the events in Virginia, which included the death of a woman protesting the white nationalist gathering, have shocked everyone. “The evil that exists, the hate that is based solely upon the color of one’s skin or the heritage of their family, is one that we cannot ignore and we must clearly and emphatically denounce,” he said.

Rep. David Bowen (D-Milwaukee) thanked members of the Assembly for taking up a resolution condemning those groups. “We will not stand for individuals that embrace hatred and darkness in their hearts,” he said.

Lawmakers approved the resolution unanimously by standing for a moment of silence.