You are here: Home / Health / Medicine / Baldwin and Johnson sign on to opposing health care bills 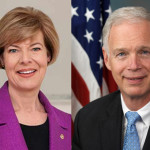 Wisconsin’s U.S. Senators are supporting opposing health care bills in Washington. A group of Republican senators – including Ron Johnson of Wisconsin – are making a late push to repeal and replace Obamacare this month. The bill, backed by Lindsey Graham of South Carolina, would combine funding for Medicaid and Obamacare’s subsidies into a block grant to the states.

And Wisconsin Democrat Tammy Baldwin is supporting Senator Bernie Sanders’ Medicare for All bill. That measure is unlikely to advance in the GOP controlled Senate.

“Wisconsin’s premiums have by and large doubled, because of the faulty architecture of Obamacare,” Johnson said during a Wednesday press conference debuting the legislation. “In many cases, premiums have tripled.”

The GOP press conference came before a scheduled news conference by Sanders and Democrats to unveil a new single-payer bill that would cover all Americans under a more comprehensive version of Medicare. Baldwin, in an opinion piece for the Milwaukee Journal Sentinel, said she supports the Medicare-for-all legislation from the Vermont independent.