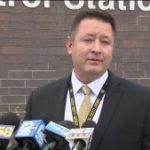 Two people have been arrested in Racine County for allegedly keeping a 9 year old girl locked in a dog kennel in their town of Norway home, a case the sheriff said is “disturbing, and it ought to disturb anybody who hears about this.”

The Sheriff’s Office and the County Human Services Department were called to an elementary school in Wind Lake to investigate a child abuse complaint. At the home, they found a wire and metal kennel was about 5 feet high, 4 feet long and 8 feet wide, and a padlock allegedly used to keep the child from escaping. The victim and a 10-year-old child were removed from the home and placed in protective custody.

Sheriff Christopher Schmaling said that the alleged abuse had been going one for a relatively short time. “The child was housed in this dog kennel for at least a week, about 12 hours a day,” Schmaling said during a Thursday press conference. He said the girl was let out for the school day, then placed back in the kennel evenings and weekends, “while the caregivers had other things to do.”

Schmaling said the two people under arrest are the children’s 46-year-old grandmother and the 48-year-old man who is owner of the home where they lived. He said the children’s parents are apparently not in the picture.

“The grandmother has sole custody of these children,” the sheriff said. “This particular child was under the sole direction and care of this woman, who this 9-year-old would call grandma.”

Schmaling said he can’t understand what some people are thinking. “What goes through your mind? What would that child have to do, to have you go out and purchase a dog kennel, and put that child in that kennel? I wouldn’t treat my own dog that way. I can’t imagine that you would treat another human being, much less a 9-year-old child, in that way.”

“I find some comfort in knowing that this 9-year-old and sibling are in a safe, warm environment,” Schaling said, adding that the adults are being held in the Racine County Jail, “where they ought to be.”