You are here: Home / Education / Evers talks ‘State of Education’ in Wisconsin 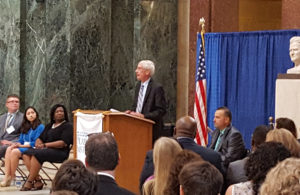 Wisconsin schools face challenges, and state Superintendent of Public Instruction Tony Evers on Thursday laid out what he believes the state should be doing to address them.

Delivering his annual “State of Education” address at the Capitol, Evers drew heavily on the words of former President Teddy Roosevelt several times by calling on people to demonstrate leadership and confront problems by seeking solutions, instead of offering criticism. “The challenges we face in our schools, our state, and our nation have demanded that kind of grassroots, on-the-ground leadership from all of us,” Evers argued.

Evers focused in on school funding, student health, and transportation as key issues that need to be dealt with. He criticized lawmakers for reducing tax dollars sent to schools and for rejecting federal dollars to help expand Medicaid programs, and also argued the state should be able to find a way to fund road construction in the state while supporting schools.

Many of the themes are those Evers is expected to campaign on as he seeks the Democratic nomination in the 2018 race for governor.