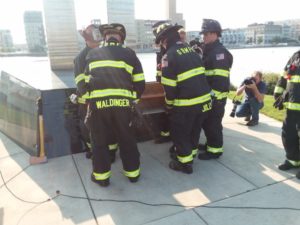 As communities across the nation stopped this morning to mark the 16th anniversary of the 9/11 terrorist attacks, one Wisconsin city marked the occasion by decommissioning a memorial to the tragic day.

Green Bay’s Parks Committee recently voted in favor of removing the monument, which features a steel girder that was salvaged from the original World Trade Center in New York City. The decision was the result of concerns about the deterioration of the structure and inaccurate flight information being etched into the monument.

The steel beam was removed from the monument and will be stored inside the Green Bay Police Department. Public Works Director Steve Grenier says the city is hoping to replace the memorial with a more interactive and permanent display, which will be featured outside a future new public safety building.

Grenier says that could include a touchscreen display that shares a variety of information. “It could be everything from what happened on the day, flight information, the passenger manifest from that day, who died, up to and including how the world changed that day and how our lives now are significantly different than they were before.”

Police Chief Andrew Smith notes the importance of preserving the girder in his department’s headquarters until the new memorial is ready to open to the public. “I’m hoping that future generations will remember the sacrifices that were made that day by the fire departments, by the police department, and by those innocent men, women, and children that were killed in this vicious attack.”