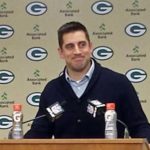 Grothman says players, coaches and staff have the right to link arms, take a knee or sit. “That’s their right, but it’s also the right of other people to say ‘these people are ridiculous,'” Grothman said. “Young people are going to look at this and say ‘what horrible thing is going on in this country?'”

The Packers have announced plans to stand and link arms during the anthem, prior to tonight’s game against the Chicago Bears at Lambeau Field. They’ve invited fans to join them in doing so.

“This is about equality. This is about unity and love and growing together as a society, and starting a conversation that might be a little uncomfortable for people,” Packers quaterback Aaron Rodgers said earlier this week.

“There is opportunity in America,” Grothman said. “People all around the see it, but for whatever reason, some whining people have convinced themselves that America is a difficult place to live.”

The 6th District Republican does feel that the president should cut back on his tweeting about all issues.  The recent NFL protests have been a reaction to Trump’s inflammatory comments about how he believes players who protest should be fired.

KFIZ contributed to this report