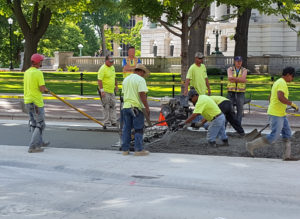 After holding up passage of the state budget for more than two months, the legislature’s Joint Finance Committee has approved a plan to fund Wisconsin road projects.

The package endorsed by majority Republicans late Tuesday night with no votes from Democrats includes about $400 million in borrowing for roads, cuts 200 positions at the state DOT, and imposes an annual $100 fee on electric and $75 fee for hybrid vehicles. It also eliminates the state’s prevailing wage requirement on state building projects, prohibits the enforcement of a number of local regulations on quarry operations, and authorizes spending up to $2.5 million to conduct a study on implementing tolling in Wisconsin.

State Representative Gordon Hintz (D-Oshkosh) was among Democrats who argued the proposal fails to fix serious problems with road funding. He argued lawmakers deserved an “F” for the plan and should “try again.”

Republicans defended the proposal, although JFC co-chair John Nygren (R-Marinette) was among several who admitted it’s far from perfect. “We’re going to pass a responsible budget that lives within our means, but by no way are we solving our transportation challenge,” he said. “Quite honestly it’s disappointing to me.”

Majority Republicans in the Senate and Assembly have been at odds for month over how to handle a projected $1 billion shortfall in the transportation fund. While the Assembly GOP wanted to explore new revenue options, Governor Scott Walker had vowed to veto any plan that increased gas taxes or other fees to pay for roads. Walker has indicated support though for the fee on electric and hybrid vehicles. Talks on transportation funding held up work on the state budget for weeks, with the plan now more than two months overdue.

The budget-writing JFC is expected to resume work Wednesday morning on the plan, with the goal of wrapping up its voting on the overall budget by later in the day. The full proposal would then head to the Assembly for a potential vote next week.