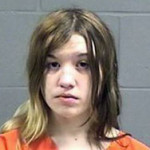 A judge in Oneida County has denied a challenge to a prison sentence for a 19-year-old woman convicted in the murders of her mother and step-father.

Ashlee Martinson was given a 23-year prison sentence for killing Jennifer and Thomas Ayers, at their family home in rural Oneida County two years ago.

Martinson entered a guilty plea to two counts second-degree intentional homicide. She stabbed her mother and killed her stepfather with a shotgun, claiming that Thomas had been abusing her for years. She was 17 at the time.

Her attorney motioned to reduce her prison sentence, arguing that she wasn’t capable of making rational choices, but Judge Michael Bloom disagreed. Martinson’s attorney plans to file an appeal.

Martinson locked her three sisters, ages 9, 7, and 2, in a bedroom before the killings. She fled to Indiana with her boyfriend, but was sent back to Wisconsin to stand trial, and has been incarcerated since March, 2015.