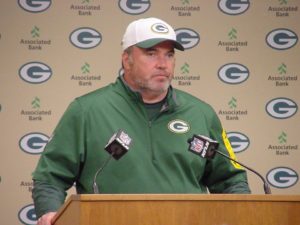 Green Bay Packers head coach Mike McCarthy said he will join his players and lock arms during the National Anthem on Thursday night.

The Packers plan to demonstrate unity.  The players released a statement through the team website Tuesday night inviting fans to join them in portraying unity, locking arms in the stands during the national anthem.

“They put a lot of time and energy and thought into it,” McCarthy said.  “They’ve met, they’ve had a chance to discuss, you know, each and every guy that expressed his opinion.  I think it’s like anything in life, you’re never going to have everybody feel 100% the same way, but it’s just something we’ve talked about a lot as a football team because I always want to make sure the why — why are we doing this? — is explained.”

Quarterback Aaron Rodgers revealed the invitation for fans to stand and lock arms in the stands on Tuesday, joining the players on a “united front”.  The idea was discussed by the players in a meeting on Monday.