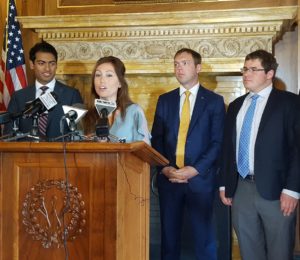 Younger members of the state Assembly are joining together to address topics important to Wisconsin’s millennial population.

Republican state Representative Adam Neylon (R-Pewaukee) is a co-chair of the effort the Wisconsin Future Caucus, which he says will work to focus on finding common ground on issues that should be bipartisan for all younger voters. “We’re not always going to agree on things, but there are certain issues that I think we can lead on,” he argues.

Those shared concerns include entrepreneurship and emerging technologies, like self-driving vehicles. Neylon says it’s important that the state allows the technology to be developed in Wisconsin. “It’s going to improve our economy and it’s going to save lives,” he says.

Rep. Amanda Stuck (D-Appleton) admits some more controversial issues, such as student loan debt, may be more difficult to work on. “I think that will probably be part of the discussion,” she says. “Whether or not we can agree on a specific piece of legislation remains to be seen.”

Majority Republicans in the Legislature have opposed efforts by Democrats to create a state-based system for refinancing student loan debt.

Still, by working together, Stuck says they hope to show that they can put aside the bickering and partisanship that has taken hold across the country.