You are here: Home / Packers / Packers rebound to beat Bengals in OT (AUDIO) 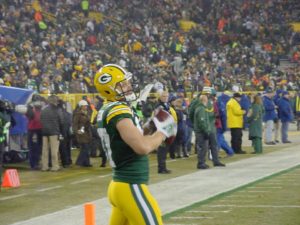 The Cincinnati Bengals jumped out to a 21-7 lead and led 21-14 after three-quarters, but the Green Bay Packers engineered a fourth quarter comeback to pull out a 27-24 victory in overtime on Sunday at Lambeau Field.

The Bengals registered six quarterback sacks in the first half, yet rushed just four defensive lineman most of the game.  It didn’t help that the Packers continued to play without starting left tackle David Bakhtiari (hamstring) and while Bryan Bulaga (ankle) returned to action at right tackle, he left the game in the second half.

Packers quarterback Aaron Rodgers passed for 313 yards and three touchdowns, but he also threw his third interception in three games, which was returned 75-yards for a touchdown by Cincinnati’s William Jackson.  It was just his second career pick-6 and the first since Dec. 7, 2009.

The Packers came out of the locker room at half time and went right to work.  Tight end Lance Kendricks took a reception 51-yards, the highlight of an eight play, 75-yard touchdown drive.

Rodgers found Jordy Nelson on a touchdown pass in the right corner of the end zone to tie the game and force overtime.

The Bengals won the coin toss and started first in overtime, but the Packers defense shut them down immediately and were forced to punt.  On third and 10 from their own 21, Rodgers used a hard count to get the Bengals to jump off sides.  With the free play, Rodgers found Allison for a 72 yard reception.  After a running play to move the ball into the center of the field, Mason Crosby came on to boot the 27-yard game winning field goal to secure the victory.

Jordy Nelson caught a pair of touchdown passes in the win, moving him past Sterling Sharpe into second on the Packers’ all-time touchdown reception list with 66.  Nelson has a way to go to catch Don Hutson, who is the franchise leader with 99 touchdown receptions.

The game started in 89-degree heat, which goes down as the hottest temperature for a game played at Lambeau Field.

AUDIO: Aaron Rodgers says it might not have been pretty, but a big win :20