You are here: Home / Packers / Packers reduce roster to 53 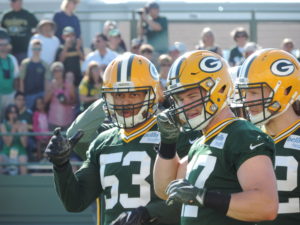 The Green Bay Packers trimmed their roster to 53 players on Saturday.

The Packers will start the regular season with only five wide receivers on their roster.  A sixth will come in week number two when Geronimo Allison’s one week suspension is over.  They released  both of their draft picks, fifth rounder DeAngelo Yancey and seventh rounder Malachi Dupre.  In addition, Michael Clark and Max McCaffrey were released.  McCaffrey was a member of the Packers practice squad last season.

The Packers kept only two quarterbacks.  After Taysom Hill and Joe Callahan battled for No. 3 job, both were released.  One of them should get called back to the Packers practice squad on Sunday.

The Packers also kept ten offensive linemen after going with just eight on their initial 53-man roster a year ago.  They held on to a pair of undrafted free agents, Lucas Patrick and Justin McCray, perhaps to protect themselves from injuries to starting right tackle Bryan Bulaga and backup center Don Barclay.

As of right now, injured rookie defensive tackle Montravius Adams is on the roster.  He could be headed for injured reserve with a designated-to-return tag.

The Packers also haven’t officially signed linebacker Ahmad Brooks yet, despite the two sides agreeing to a contract last week.  That will likely happen Sunday or Monday as the roster and practice squad continues to be finalized.