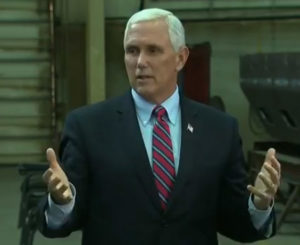 Tax cuts were on Vice President Mike Pence’s mind, during a visit to a factory in Waukesha Thursday afternoon.

“We’re going to simplify the tax code,” Pence said. “The president’s tax code plan goes through – 90 percent of the American people will be able to file your taxes on one sheet of paper.”

Democratic Party of Wisconsin officials called the stop a photo op designed to distract away from who the tax plan actually helps. “As governors, Mike Pence and Scott Walker share a record of touting so-called reforms that actually lavish tax breaks overwhelmingly on the wealthy,” DPW chair Martha Laning said in a statement. “Today Gov. Walker will help Vice President Pence peddle a national tax cut for the rich and big corporations that was crafted by former Wall Street insiders.”

The vice president was also scheduled to attend a fundraiser in Milwaukee Thursday night.