You are here: Home / Fires/Accidents/Disasters / State officials will follow up on damage in Ashland 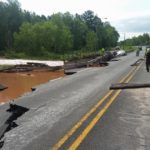 State officials will do a one-year follow up Wednesday, on a weather disaster in northern Wisconsin.

Members of Governor Walker’s cabinet will hold a year after check-in with local officials and emergency managers in Ashland, to discuss response efforts and identify remaining needs in the wake of heavy rains in July of last year, that caused widespread damage in three northern counties.

Walker declared a State of Emergency for eight counties in northern Wisconsin, due to damage to property and infrastructure in the region.