You are here: Home / Legislature / Vos: Assembly will not be ‘held hostage’ on budget 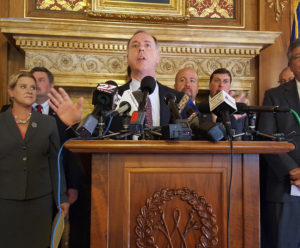 While the state Assembly is set to pass the budget, its future in the Senate remains uncertain.

Senate Republican Leader Scott Fitzgerald told reporters Tuesday evening that he does not yet have the votes to pass the bill, and that changes may be needed in order to get it through his chamber.

Assembly Speaker Robin Vos said Wednesday that the budget already faced a lengthy negotiation in the Joint Finance Committee, and he’s open only to technical changes at this point. “That’s not how our process works, and we’re not going to be held hostage to individuals who have some kind of a wish list that they want,” Vos said.

The state budget is now more than two months overdue, after majority Republicans debated behind the scenes on how to resolve issues with transportation and school funding, along with tax cuts. The Assembly opened its debate on plan shortly after noon Wednesday, with a vote expected sometime before midnight. It is expected to pass the Republican-controlled chamber, sending the $76 billion budget to the Senate.

Vos said he’s hopeful the Senate will not make any changes when it takes up the bill, since that would either send the budget back to the Assembly or force the bill in to a conference committee. “We are not going to allow individual senators to being renegotiating the entire budget,” he argued.