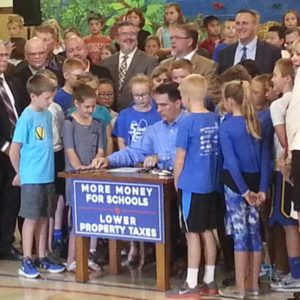 Gov. Scott Walker signs the budget during a ceremony in Neenah. (Photo: WHBY)

Governor Walker is responding to one of the chief concerns his fellow Republicans have about a veto he made to the newly-signed state budget.

Walker told WTAQ’s Jerry Bader Show why he vetoed a provision that would’ve provided more money to low-revenue school districts. “Those districts, including some where they failed to pass referendums, could have passed a tax levy increase anyways just by the school board, the governor said. “My sense was, if you’re going to go exceed the revenue limits and raise the property taxes, you should have to get the voters’ approval.”

The $76 billion spending plan does set aside $11.5 billion in K-12 education funding, the most in state history.

Walker also defended a budget provision that could be seen as going back on a promise not to raise fees to pay for roads – a $100 fee for electric vehicles and $75 fee for hybrids. He said that “for people who pay at the gas pump, there is no increase.  In this case, for folks who don’t pay anything or pay less, it just matches the parity of where they’re at.”

The gas tax is used to fund the state’s roads. Walker said the budget item ensures fairness for all drivers.

Legislative Democrats have been critical of the budget, saying it doesn’t adequately address transportation funding, claiming major highway and interstate projects will be delayed.

Walker said he feels the state is on track in that regard. “When you remodel your house, you don’t do 12 projects at once, you pay as you go.  We’re at a point now where we pay off more of our debts than we authorize new bonding and borrowing going forward.”

Walker signed the two-year state budget Thursday during a ceremony in Neenah.