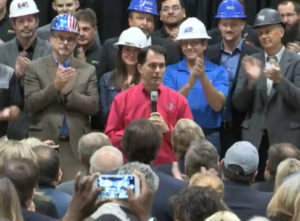 Walker signed the bill Monday afternoon during a ceremony at Gateway Technical College in Sturtevant, during which he said the proposed $10 billion facility the company hopes to build will mean more for the state than just the 13,000 people who could eventually work there.

“I believe that we can produce the talent and the supply chain and the tools and the opportunities to make this not just successful, but to make it one of the most successful ventures in the history of the world,” he said.

Walker said he believes the bill, the largest incentive package offered to a foreign company in U.S. history, will help attract other new developments and talent to the state as well. “Our quest in doing this is to send a message not to just employers, but to send a message to talent…that this is a place, that Foxconn picked us, you should pick Wisconsin to come work at,” the governor said.

The legislation includes tax credits for Foxconn, along with changes in the state permitting process and environmental reviews for the proposed factory. It’s expected to help the state finish negotiating a contract with the company, which has not yet announced a possible location for the facility.