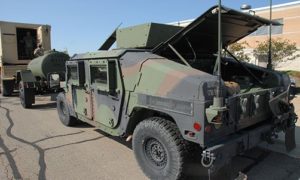 More than 2,500 members of the Wisconsin National Guard will help with the massive recovery efforts in Florida in the aftermath of Hurricane Irma.

The Wisconsin Guard’s mission is expected to include rescuing people who were trapped by rising floodwaters, preventing more injuries and protecting property left vulnerable by residents who fled the approaching storm. Governor Scott Walker said those troops will “stand ready to help our friends in Florida.”

Soldiers being deployed from the state include the entire 32nd “Red Arrow” Infantry Brigade Combat Team, the 1157th Transportation Company, members of the 112th Mobile Public Affairs Detachment. The Wisconsin Department of Military Affairs says other Wisconsin Army and Air National Guard elements have also been called to report for duty and begin traveling to Florida.

Irma has been one of the strongest Atlantic Ocean storms ever recorded. The hurricane made landfall over the weekend and left behind a path of property damage and flooding as it moved up through the state. It has since been downgraded to a tropical storm and moved into Georgia.