You are here: Home / Sports / Bucks and Parker don’t strike a deal 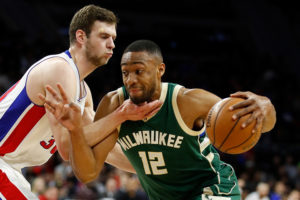 The Milwaukee Bucks and forward Jabari Parker didn’t reach an agreement on a contract extension before Monday’s 5 p.m. deadline for players in the 2014 NBA draft class.  Without that deal, Parker will play out the final season of his rookie-scale contract and become a restricted free agent next summer.

Parker is rehabbing his second torn ACL in his left knee and won’t be ready to return until at least February.

The Bucks are still interested in Parker moving forward and will have the chance to match any offer sheet Parker receives from another team.

The Bucks claimed guard DeAndre Liggins off of waivers on Monday, bringing their roster to 15 players.  The minimum deal is not guaranteed.

The 29-year-old Liggins has played for five NBA teams since 2011.  He played in 61 games with the Cleveland Cavaliers last season, averaging 2.4 points and 12.3 minutes a game before being let go in April.