You are here: Home / Packers / Bulaga back at practice, hoping to play on Sunday 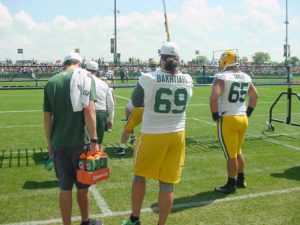 It took a while for Green Bay Packers right tackle Bryan Bulaga to figure out he was dealing with the dreaded high ankle sprain.  He thought he was good to go when he returned to the lineup against Cincinnati, only to return to the sidelines in the second half.

Now, after some extra time off for the Packers, Bulaga is back practicing and is hopeful of returning to the starting lineup when the Packers face the Cowboys in Dallas on Sunday.

Bulaga said he still has some issues and isn’t totally in the clear.  Then again, he said he probably wouldn’t be 100% when he returns to the lineup anyway.

Bulaga was joined on the practice field on Wednesday by starting left tackle David Bakhtiari, who has missed time with a hamstring injury that he suffered in the opener against Seattle.

Wednesday’s workout isn’t the most physical workout of the week.  That comes when the players put the pads on Thursday.  If both players can get through that without any problems, they both could rejoin the lineup on Sunday.  It would give the Packers their intended starting five-man front for the first time this season.